Torah and Rationalism: Understanding the Torah and the Mesorah 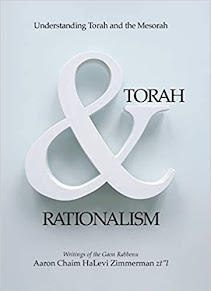 For the uninitiated, Rabbi Aharon Chaim Zimmerman is known as an eccentric Rosh Yeshiva and Jewish intellectual who flourished in the second half of the twentieth century. Rabbi Zimmerman was born in 1914 into an illustrious rabbinic family, as he was a nephew of Rabbi Baruch Ber Lebowitz (1862-1939)—the famed Rosh Yeshiva of Kaminetz and author of Birkas Shmuel. As a young teenager, Rabbi Zimmerman, already recognized as a prodigy, was sent to study under his venerated uncle. Afterwards, he studied under Rabbi Moshe Soloveichik (1879-1941) at the Rabbi Isaac Elchanan Theological Seminary of Yeshiva University, where he received rabbinic ordination in 1939. At the tender age of 24, Rabbi Zimmerman became the youngest member of the RCA. He was later tapped to serve as Rosh Yeshiva of the Hebrew Theological College (Skokie Yeshiva) in Chicago until his controversial dismissal in 1964. Subsequently, Rabbi Zimmerman served as Rosh Yeshiva in various other institutes, finally making Aliyah in 1972 and opening a Yeshiva in Jerusalem. Rabbi Zimmerman passed away in 1995, but his student Moshe Landy undertook to print some of his Rebbe's unpublished works posthumously.

Rabbi Zimmerman penned numerous books and monographs, both in English and Hebrew, on various intricate topics—mostly relating to Halacha and Jewish Philosophy. Many of his Hebrew articles were published in the scholarly rabbinic journal HaPardes (originally edited by Rabbi Shmuel Aharon Pardes, and, from 1947, by Rabbi Simcha Elberg). Most of those articles concern various minutiae in the Halachos regarding ritual sacrifices and related laws of ritual purity/impurity. Rabbi Zimmerman also famously penned an important work entitled Agan HaSahar concerning the placement of the international dateline in Halacha. He also wrote extensively about Zionism and how the ideal Jewish State should be structured. Many of Rabbi Zimmerman's English essay were originally published in the Jewish Press and were later culled together and republished as complete books.

Besides Rabbi Zimmerman's prowess in Torah Studies and Halacha, he was also quite well-versed in the sciences, including advanced mathematics, philosophy, and physics. Dr. Harry Maryles relates that it was said about Rabbi Zimmerman that he understood quantum theory as well as Niels Bohr did at a time when most of the scientific community had barely even heard of it yet! Nonetheless, this eclectic Torah Scholar focused his energies and devotion to Torah Studies, and viewed that discipline as the most important of all.

This newly-published book represents only a small part of the greater edifice that makes up Rabbi Zimmerman's approach to Jewish theology/philosophy. The basic premise of this book is that Halacha and Talmudic study are built on a precise logical system, which is akin to the systems of reasoning behind any of the hard sciences, like mathematics. Rabbi Zimmerman offers a thorough epistemological defense of this staunchly traditionalist view, buttressing his arguments with philosophical terms and ideas.

As mentioned above, Rabbi Zimmerman was quite at home when discussing philosophy. In this book, he cites such classical philosophers as Plato, Aristotle, Spinoza, and Machiavelli to bolster his assertions, while he also references later philosophers like Ludwig Wittgenstein, Bertrand Russel, and even Ayn Rand.

Another recurrent theme in Rabbi Zimmerman's new book concerns the idea of insiders versus outsiders. In fact, Rabbi Zimmerman treats this idea at greater length in two of his previous books, Torah and Reason (1979) and Torah and Existence (1986). This aspect of Rabbi Zimmerman's weltanschauung maintains that the true study of Torah must follow the time-tested traditional methodology of the mesorah, and Torah content can only be assessed through that internal logic. He makes the point that just as other disciplines can only be understood from within their own ontological system, so can Torah only be truly understood by the insider.

To illustrate this point, Rabbi Zimmerman draws an analogy in which he cites the following anecdote: Zionist leader Zeev Jabotinsky once proclaimed that as intelligent as Albert Einstein might be, he cannot understand the situation of the Jewish people "unless he understands two languages that are read from right to left—Hebrew and Yiddish." In the same way, Rabbi Zimmerman argued, one who is an outsider to the notion of Torah Study and has not been initiated in its inner logic/methodology cannot grasp the ideas and concepts discussed therein.

The brunt of Rabbi Dr. Zimmerman's criticism is levelled against people in the mold of Heinrich Graetz, Leo Strauss, and Gershom Scholem. He polemicizes against these Jewish scholars for imposing their own "manmade" framework on the Torah's Divine structure, and then framing the Halacha and Jewish tradition through subjective considerations rooted in history, politics, sociology, and the like. Rabbi Zimmerman reserves his harshest condemnations for Levi (Louis) Ginzberg, one of the founders of Conservative Judaism. In fact, a 40-page section of this book is devoted to outing Ginzberg as a plagiarizer and falsifier.

In this work, Rabbi Zimmerman argues time and again how these outsiders and others like them misunderstood the original intent of the traditional rabbinic authorities and misconstrue their words to fit with their own preconceived (biased) notions. Such Jewish scholars often attribute Halachic rulings or positions to the machinations of political/social engineering, instead of to the learned conclusions of applying a traditional methodology of study.

This book, like most of Rabbi Zimmerman's previous books, is actually a sort of apologetic defense of traditional Judaism. The drawback of his style is that he often makes very strongly-worded assertions without actually backing them up. In this reviewer's opinion, the entire book feels like it consists of off-the-cuff remarks that Rabbi Zimmerman made without meaning to actually get into the topics he broaches. It sometimes feels as if Rabbi Zimmerman could have written an entire chapter to explain just one single sentence in this book. The reader must bear in mind that Rabb Zimmerman did not originally prepare these essays with the intention to create the book at hand, so the ambiguities and vagueness are more the editor’s doing than the author’s.

Furthermore, in this book, Rabbi Zimmerman makes many general, sweeping statements, without going into more detail about how they play out and what exactly he means, or what examples of those ideas we can find. For example, in several chapters throughout this book, Rabbi Zimmerman variously claims that many parts of the Aggadah, Kabbalah, and Rambam's philosophy are all just meshalim (parables), but he fails to tell us what the nimshal is. This comes from Rabbi Zimmerman’s aversion to spoon-feeding his readers/students with information. He instead tries to make certain points, but leaves the reader to do the “leg work” and work out the exact details. In this way, the assertions he makes are really just starting points from which the reader can begin his own personal exploration and intellectual inquiry into the subject matter.

This reviewer feels that if Rabbi Zimmerman would have buttressed his name-dropping and supped-up appeals to authority with more substantial arguments to prove his points, then this book could be an important guide to understanding Judaism from the inside. Similarly, if this book would have provided more examples of how the Halacha is based on a logical system instead of having us take his word for it, it could have a far greater impact.

In this reviewer's final assessment, Rabbi Zimmerman's new book is a great introduction to some of the sophisticated ideas behind traditional Judaism, and how it ranks knowledge/rational thought. The editor of this work graciously took the time to locate and provide us with footnotes that contain the exact Hebrew text for most of the sources that Rabbi Zimmerman quotes (as well as Hebrew excurses probably deemed too provocative for the English reader). Indeed, Rabbi Landy prepared for publication another small part of Rabbi Zimmerman's greater overarching philosophy, and we hope to see more of his unpublished writings see light in the future.

For other reviews of this work that take a different approach, see:

Posted by Reuven Chaim Klein at 5:48 AM

To submit your book for review in The Rachack Review, please contact us at: rachack@gmail.com
Our reviews have appeared in the Jewish Press, JewishLink of NJ & BWC, Torah Book Reviews, The Jewish Voice, Jewish Bible Quarterly, RCA Rabbis List, Amazon.com, and GoodReads.
We cannot guarantee that all unsolicited books will actually be reviewed or will match our interests, but you are welcome to try reaching out to us.