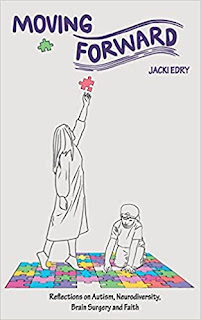 While many of us habitually make judgements about other people and their actions, the Rabbis clearly teach us: “Don’t judge your friend until you’ve reached his place” (Avot 2:4). This means that we cannot pass judgement on others’ actions until we have come to the exact same set of circumstances that led to their acts. Only then — when we can see the full picture — can we begin to properly assess others’ actions. In most cases, this means that we never have the right to judge others, because we will never truly end up in the exact same situation as them. This book, however, illustrates the notion that if it does somehow come to pass that we find ourselves in the same condition as another, we can constructively use that experience to better our understanding of their situation and what drives them to act in the ways that they do. Such is the selfless attitude of this book’s author, Mrs. Jacki Edry.

Let me explain what I mean. Mrs. Edry has an extensive background in education, as she previously worked with autistic children and even wrote her thesis at Hampshire College on the topic of how the educational system can better cope with autistic students. In her initial research on the topic, she theorized about what might trigger autistic children to seemingly “act out” in the ways that they often do and periodically “shut themselves out” from the world. She understood that these so-called “misbehaviors” are not the results of cognitive or deliberate misanthropic choices, but are generally natural reactions to sensory overload or sensory processing confusion (similar to dyslexia).

Later on in life, Mrs. Edry found out about a little-known condition called Irlen Syndrome, which is “a neurological phenomenon related to visual perception and processing.” In many cases, it turns out that neurological diagnoses like dyslexia and ADHD are actually cases of Irlen Syndrome masquerading as a different disorder. For example, both Irlen Syndrome and dyslexia can cause distortions/challenges in visual perception and reading, which can, in turn, can lead to difficulties in concentration. Just imagine if your visual environment is unstable (with letters dancing across the page, distorted depth perception, etc.), then it is quite understandably difficult to concentrate.

These sorts of misdiagnoses and misunderstandings about neurologically-challenged people stem from the mental health industry’s inability to properly evaluate people who live in totally different circumstances from their own. Psychologists, psychiatrists, and neurologists can only work with the data they have and can only build on their understanding using their own faculties and the realties within which they live. Even if they tried as hard as they could, they simply do not have the tools or experiences to always understand what people with neurological issues are going through and how they perceive the world.

After making Aliyah to Israel as a young adult, Mrs. Edry merited to establish a beautiful family and raise several neurodiverse children—each of whom had their own issues to deal with. But in April 2013, her life changed forever: Mrs. Edry underwent a complicated and arduous surgery to remove a tumor growing on her brain stem. When she awoke from this life-changing ordeal, she was never the same person. She was now subject to many of the same sensory difficulties that she had studied earlier on in life and had witnessed personally with her own children. This unique set of circumstances put Mrs. Edry in (what I would consider an unfortunate) position that enables her to experience firsthand all the various ideas about neurodiversity and neurofunction that she had theorized about earlier on. She could now use direct observations on herself to better understand the issues at hand and confirm her theories. For many of us, people with neurodiversity might appear to be like a closed book that we simply cannot understand. But Mrs. Edry can not only sympathize with them; she can empathize.

This fascinating book is broken up into three parts. The first section lays out Mrs. Edry’s ideas and advice to parents of autistic and otherwise neurodiverse children. This includes things like how to cope with the diagnoses and other practical suggestions. It also discusses how irregularities in the senses of seeing, hearing, feeling, smelling, and tasting can affect neurodiverse people in varying ways.

The second section of the book is the shortest — but not the least inspiring. In this section, the author paints a vivid picture of her devoted relationship to God, the Torah, the Jewish People, and the Holy Land. It is these strong connections that later served her well in trying times.

The book’s third section is presented in the form of a diary that Mrs. Edry kept starting from just a weeks after she woke up from her life-altering brain surgery all the way until the Coronavirus Pandemic of 2020. In these diary entries, Mrs. Edry struggles with the reality that is facing her, but remains optimistic and places her trust in God. Throughout these diary entries, Mrs. Edry offers the reader various observations she has had about neurodiversity and how her situation helps her better understand those types of conditions, all the while painting a picture of the challenges which had become her lot in life.

The book concludes with a short prayer to God expressing Mrs. Edry’s hopes and dreams for the future. This prayer takes the poetic form of a sincere Jewish soul reaching out to her Creator. Indeed, Mrs. Edry’s sincerity and selflessness shine through on almost every page of this book, and this reviewer hopes that God grants her a quick and complete recovery from all her ailments.