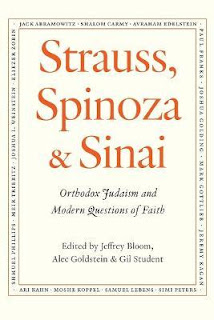 I love the basic premise of this book. For the uninitiated, Leo Strauss (1899–1973) is known in scholarly circles for bringing the dichotomy between philosophy (Athens) and revelation (Jerusalem) to the fore. Benedict (Baruch) Spinoza (1632–1677) is infamous as the prototypical Jewish heretic, who left the fold without converting to Christianity or Islam and purported to have presented a philosophical refutation of Judaism that continues to influence secularist attacks on religion to this day. Yet, in one of his many philosophical musings, Strauss commented that Spinoza’s refutation only applies “if orthodoxy claims to know that the Bible is divine revealed, that every word of the Bible is divinely inspired, that Moses was the writer of the Pentateuch, that the miracles recorded in the Bible have happened, and similar things.” Yet, Strauss concedes “but the case is entirely different if orthodoxy limits itself to asserting that it believes the aforementioned things…” This book explores whether Strauss’ back-handed defense of Orthodoxy can be acceptable from an Orthodox perspective.

To do that, the editors of this volume solicited essays broadly aimed at answering this particular question from various contemporary Orthodox Jewish thinkers. The book consists of seventeen such essays (arranged in alphabetical order by author’s surname), plus an introduction by Jeffrey Bloom that lays out the question and a conclusion. As to be expected, there is much overlap within the discussions of the various contributors; but unfortunately, the book does not have a proper index which could help the reader map out where similar issues are broached.

Most of the essayists — like Rabbi Jack Abramowitz and Rabbi Shalom Carmy — understandably reject the notion that Judaism suffices with a call for belief in God and the Torah, instead clarifying that Judaism is about knowing Him and His Torah in a sort of personal way. On the other hand, Rabbi Gil Student toys with the idea that belief itself is a form of knowledge, or that belief can only come into play once we’ve reached a stalemate on the question knowledge. Rabbi Dr. Ari Kahn similarly contends that the question of belief versus knowledge boils down to one of semantics and really depends on how one defines those terms. As is his way, Kahn musters the force of many difference sources within Jewish tradition to highlight these various possibilities.

Other contributors, like Rabbi Avraham Edelstein, take this discussion in a slightly different direction, dismantling the logical moves that Spinoza made and showing how Judaism is the most viable hypothesis, even if to some extent, it requires a leap of faith. They elaborate on how biases and preconceived assumptions (under the guise of unchallengeable “axioms”) color the objectivity of “scientific” inquiry into the reality of God and the Torah. The postmodern world has come to realize the presence of such biases more than ever, and Mrs. Simi Peters offers a nuanced take on how this affects the question of Strauss’s defense of orthodoxy.

In his unique way, Rabbi Jeremy Kagan offers a synthesis based on the unlikely combination of teachings from Dr. Karsten Harries of Yale University and Rabbi Moshe Shapiro. Using the two thinkers together, he criticizes the sort of self-centered thinking that motivated Spinoza and his ilk, seeing their approach as the eventual consequence of a shift in mental paradigms. This shift causes modern man to no longer feel the urgent need to worship a higher force/deity, that was more palpably felt during ostensibly more primitive times. In lieu of worshipping a god, modern man turns inwards and hubrically worships himself. While this approach appears esoteric and metaphysical on its surface, the Axial Age revolution which brought about this paradigm shift has actually been recognized and studied by philosophers, historians, and anthropologists.

Rabbi Meir Triebitz similarly criticizes Spinoza’s very limited definition of knowledge. He draws a distinction between reductive reasoning (which haughtily seeks to reduce all of reality as subject to knowable rules) and emergent reasoning (which meekly takes at face value whatever emerges from the unknowable Divine via revelation), arguing that while Spinoza (and paganism in general) follow the first approach, classical Judaism calls for a blend of the two methods.

Another trend in this book is the pivoting away from the sorts of formal logical arguments championed by pre-Kantian philosophers. This pivot leads to appeals for Judaism that are not rooted in the sort of Cartesian logic on which Spinoza bases his arguments. These sorts of approaches find evidence for Judaism in its value as the continuation of a specific legacy/tradition, in the Torah’s aesthetic beauty, in the pragmatic benefits of the religion, and in appeals to religious experience. These arguments are developed at length by Dr. Joshua Golding and Alec Goldstein, who show the pros and cons of such approaches. Rabbi Eliezer Zobin expands on the Hassidic notion of self-knowledge of God (possibly the same thing as experiential knowledge of Him) as a legitimate form of knowledge no less compelling than deductive or inductive reasoning. Whenever discussing pragmatic reasons for adopting Orthodox Judaism, Pascal’s Wager always looms large. But several contributors pointed out that Pascal himself was not swayed by his own argument, and instead was pushed toward religion by his own first-hand encounter with the Divine.

In what I personally consider a particularly compelling argument, Mrs. Simi Peters makes the case that the major appeal to Judaism comes from history and the unique identity forged by Jewish memory. But that’s just my personal taste, because I like to consider myself historically-oriented and naught but a link in the chain of the transmission of Jewish tradition.

Several of the authors who contributed to this volume used well-developed parables to sharpen their points. Notably, Dr. Moshe Koppel employed an amusing analogy that compared the discussion at hand to something that might occur in the fictional city of Metropolis, whose residents might debate the reality of Superman. Rabbi Dr. Samuel Lebens offers a similar analogy to a debate with conspiracy theorists who argue that William Shakespeare was merely a penname for somebody else.

Paul Franks challenges the reader to consider whether Maimonidean-style inquiry can still serve as a model of a rational form of Judaism nowadays. In doing so, he explores the value of approaching God from a Buberian I-Thou model. This seems to be rehashing the experiential angle with slightly different terminology. Shmuel Philips deals with a similar problem and presents a reading of Maimonidean philosophy in which the whole purpose of religion is to help one shed one’s subjectivity and achieve objectivity.

R. Dr. Mark Gottlieb and Dr. Joshua I. Weinstein are the only contributors who really delved into Strauss’ other writings and betray a deeper understanding of Strauss’ thought as a whole. Gottlieb argues that while Strauss’ noble defense of Orthodoxy does not quite line up with what Orthodoxy itself maintains, it is nonetheless a useful philosophical unmasking of the motives and biases of those who claim to have refuted Orthodox Judaism. Weinstein similarly points out the serious flaws with Strauss’ writings on Judaism and Maimonides, by noting that Strauss is woefully uninformed about Judaism and is simply ignorant of basic rabbinic sources like the Talmud and Midrashim. This makes it much harder for one to take seriously anything that Strauss claims about Judaism or Maimonides.

The real question that undergirds the entire book is the epistemological question of what constitutes valid sources of information in arguing for or against Judaism. This question is implicitly asked on every page but is barely addressed explicitly. Because each contributor employs slightly different epistemological assumptions, some of the well-argued essays in this work end up in unexpected places, like offering what seem to be sound philosophical defenses of such theologies as Da’as Torah and, l’havdil, Orthopraxy.

While a cynical reader might simply dismiss this book as mere apologetics, the discerning reader can recognize its value as a well-spring of intellectual frameworks for answering the basic questions of Judaism in modern times. The end of Rabbi Gil Student’s essay offers several helpful strategies for reducing the sort of destructive cynicism that is so rampant nowadays. These include “personal acquaintance with saintly rabbis” (page 262), which may help lead to establishing rabbis — both contemporary and historical — as trustworthy figures and bearers of tradition.

After presenting all of these essays, the book closes with a conclusion by the editors that summarizes and compares the different approaches taken up by the various contributors.

I, for one, would have enjoyed reading essays on this topic from even more contemporary Jewish thinkers that I otherwise read or listen to, like David P. Goldman (whose writings are dripping with nihilism vs. existentialism), Ben Shapiro (whose 2019 book argues that the influence of Jerusalem on Athens has often been understated), Moshe Halbertal (whose scholarship features a rare combination of rabbinics and philosophy), Natan Slifkin (whose blog serves as the mouthpiece of “Rationalist Judaism”), David Bashevkin (whose work in the forefront of Jewish Education directly relates to the questions at hand), Rabbi Dr. Yitzchak Breitowitz, Rabbi Dr. Dovid Gottlieb (from Ohr Somayach), Rabbi Yitzchak Adlerstein, Rabbi Johnny Solomon, and Rabbi Arnie Wittenstein (who are all well-educated Talmidei Chachamim that undoubtedly have important and interesting ideas to contribute to the discussion). I’ve been told that some of these figures were offered to contribute but were ultimately unable to do so.

Posted by Reuven Chaim Klein at 3:45 AM