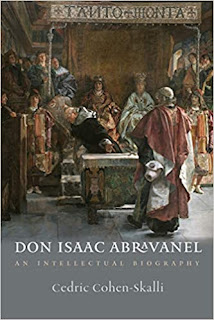 Don Isaac Abravanel: An Intellectual Biography by Cedric Cohen-Skalli (Brandeis University Press, 2021) – This book is a scholarly study on the Abarbanel’s personal life and how that intersects with his various writings. The author skillfully weaves together Abarbanel’s biography with analyses of the major works that he penned. Doing so explores how when and where Abarbanel chose to write a specific book or commentary work reveals much about the ideals or motives that shaped that work. For example, the author discusses to what extent Abarbanel’s experiences serving the kings of Portugal and Castile shaped his view of politics and his apparent endorsement of Venetian-style Republicanism. The author also shows how Abarbanel pragmatically balanced his various loyalties in his roles as Jewish community leader, royal advisor, merchant, and Biblical/philosophical exegete throughout his seventy-year life. Unlike earlier scholars who viewed Abarbanel as simply following contemporary Humanist/Renaissance trends or as establishing a failed Messianic movement (Benzion Netanyahu), this book shows that the truth about Abarbanel is more nuanced and multi-faceted than previously scholars would admit. In doing so, the book portrays Abarbanel and his literary efforts in a positive light as meant to inspire and strengthen the Jews of Iberia who were expelled starting in 1492. 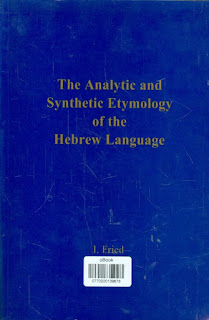 The Analytic and Synthetic Etymology of the Hebrew Language by Dr. Isaac Fried (The Hebrew Etymology Project, 2004) – This book features a 32-page introduction to Dr. Fried’s theory of etymology, followed by a several-hundred page etymological dictionary that shows how his ideas relate to thousands of specific words. If I understand the theory correctly, Dr. Fried argues that all Hebrew consonants can be classified into seven groups of consonants, each group representing a certain idea that he called “fundamental concept.” He then argues that all roots/words reflect the concepts represented by the groups into which the consonants that comprise them belong. This book is daring in its use of a single theory to explain the origins of Hebrew words, as well words in proto-Indo-European (PIE), a theoretical ancestor of English and many other languages. What bothers me about this work is something that my wife likes to call the “Horoscope Problem.” Basically, whoever writes the horoscope section of a newspaper is tasked with writing something that is on the one hand very vague, but on the other hand very specific. That way, when somebody reads their predicated horoscope, no matter what happens in their life, they will be able to interpret those events as consistent with what the horoscope predicted for them. I feel like the same thing applies to the etymological categories (“fundamental concepts”) that this book proposes; they are vague enough that anything can fit into them if you are a little bit creative, but specific enough that they feel like separate categories. I’ll be honest: I don’t think I truly appreciate the brilliance of this book. I think it may be beyond my skill level at this point. Maybe in a few years I’ll look at it again and realize the true depth of his approach. 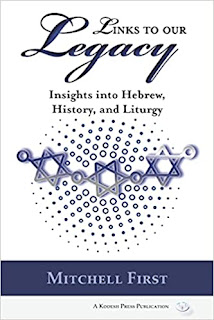 Links to Our Legacy: Insights into Hebrew, History, and Liturgy by Mitchell First (Kodesh Press, 2021) — If you’ve read Mitchell First’s previous book Roots and Rituals (also published by Kodesh Press), then you already know if you’ll enjoy this book or not because it’s more of the same. The first section of this book analyzes various words in Hebrew to find their respective etymologies, test for cognate words in other languages, and show the links between different derivatives of a given root. For example, why does neshek mean “kiss” and “weapon”? What is the difference between a komer and a kohen? Does mass refer to monetary taxes or forced labor? The second section of the book offers short essays on various topics in Jewish history, including some related to the Hebrew Alphabet, some related to the Book of Esther, and some related to the Dead Sea Scrolls. The last section features seven essays on various oddities in Jewish liturgy. If you appreciate Mitchell First’s not-so-subtle humor and his random pop culture references, then this book is for you. If you don’t, then this book is still for you—just try to ignore those interpolations. 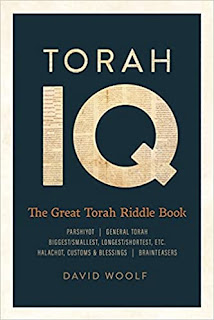 Torah IQ: The Great Torah Riddle Book by David Woolf (Tellwell, 2021) – This is a fun book for the whole family. It presents cute riddles and their answers related to each Parashah and Jewish Holiday. My family and I read some of the questions and answers at the Shabbos table and my kids found it quite enjoyable; the questions weren’t too hard or too easy, but they definitely required thinking. Some of the riddles are really just trick questions or are based on one obscure source, but for the most part we actually enjoyed this book and discovering new things. While we can quibble over the accuracy of some of the riddles, all in all, the author did a great job in collating Parashah-related trivia (but not necessarily trivial facts) that are especially entertaining for baalei kriyah and young children learning Chumash. 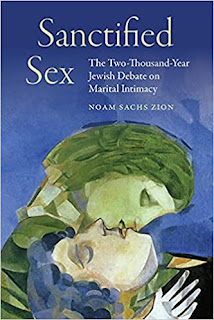 Sanctified Sex: The Two-Thousand-Year Jewish Debate on Marital Intimacy by Noam Sachs Zion (The Jewish Publication Society, 2021) – This book offers a study on the various Jewish perspectives on martial intimacy going back to the differing views present in the Talmud down to contemporary models for husband-wife interactions. The author does a decent job at collecting the relevant sources in Chazal and presenting them using contemporary terminology. Of the different approaches that he presents, he seems to approve most of the sex-positive attitude espoused by Rabbi Yitzchak Isaac Sher (1875–1952) and the Steipler Gaon Rabbi Yaakov Yisrael Kanievsky (1899–1985), although he also documents and analyzes the ascetic practices of some Chassidic groups like Slonim and Ger. This reviewer recommends that readers skip the parts of the book related to Kabbalah because they are based on academic sources rather than legitimate Kabbalistic interpretations, as well as the chapters on non-Orthodox approaches to sex.